Zwartkop - Pretoria. South Africa’s motorsport fraternity, including everyone involved in the Oettinger Polo Cup,  safely returned to action for Round 2 of the National Extreme Festival at the Zwartkops Raceway to the west  of Pretoria. The stands may have been empty as a result of motorsport’s Covid-19 compliance, but the action on track was as thrilling as ever.

Twenty of the country’s youngest driving talents were more than eager to get back behind the wheel of their Volkswagen Polo GTIs after a full five-month break from the action. It soon became clear that they had lost none of their skills as a number of drivers were immediately on the pace following Friday’s three practise sessions.

“We as Volkswagen were delighted to have the opportunity to resume racing,” commented Mike Rowe, head of Volkswagen Motorsport. “We respected all the protocols and regulations and took all the necessary steps to ensure that everyone in the Oettinger Polo Cup could race safely and responsibly. Having said that, it was good to see the masks come off while the helmets went on.”

The Oettinger Polo Cup is renowned for always providing a great racing spectacle and as expected, the series once again lived up to expectations. Saturday morning’s qualifying session was an indication of what was to come as the majority of the field was covered by only fractions of a second. After the 20 minute session, the six fastest drivers lined up for the all-important superpole session in which each driver gets one flying lap to determine the starting order. Kyalami karter Kwanda Mokoena did well to reach the superpole in only his second outing in the Polo, but the youngster had to be content with sixth position.

He was pipped by another young karter in the form of Leyton Fourie who qualified fifth fastest in his debut event. Oates twin Darren was around one tenth of a second faster and claimed fourth on the grid. It took only two hundredths of a second to separate Capetonians Dario Busi and Jurie Swart in third and second respectively. This left the door open for the second Oates brother, Justin, to claim his first ever pole position.

Qualifying is extremely important as the Polos competing in the Oettinger Polo Cup are so evenly matched. When the lights turned green, Justin Oates made the best of his pole position as he emerged from the normal first-lap carnage with a slight lead in hand. The battle behind him got really heated with Dario Busi, winner of Round 1 earlier this year, muscling his way past fellow Capetonian Jurie Swart to take over the second position. Both Busi and Swart put big pressure on Oates at the front, but the twin brother resisted and held onto his lead. He crossed the finish line a full second ahead of Busi with Swart in hot pursuit. Chris Shorter was fourth over the line followed by Darren Oates and youngster Leyton Fourie who impressed in his debut race. 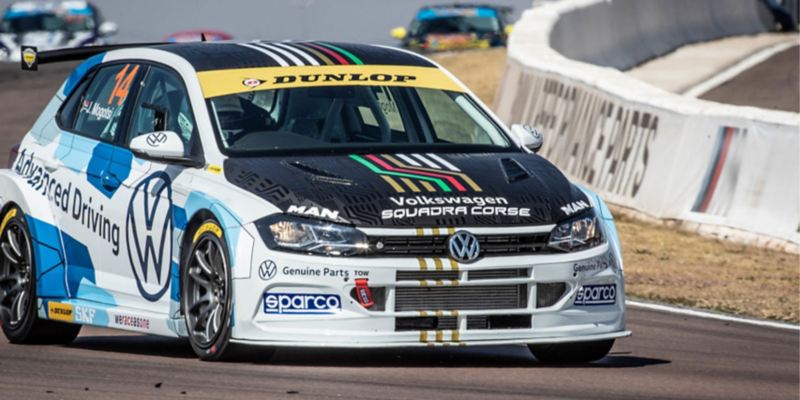 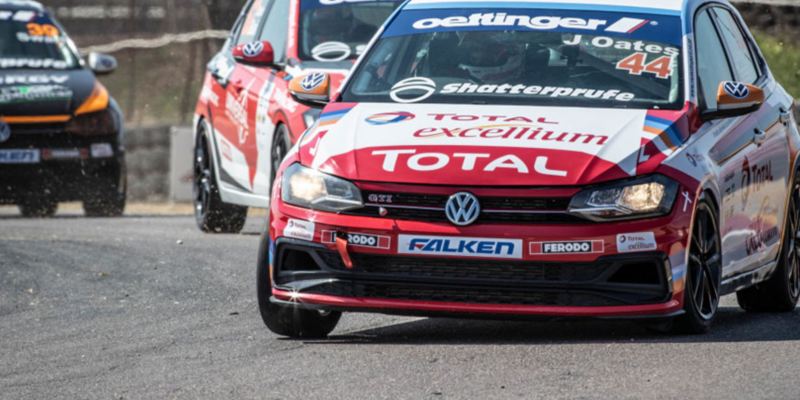 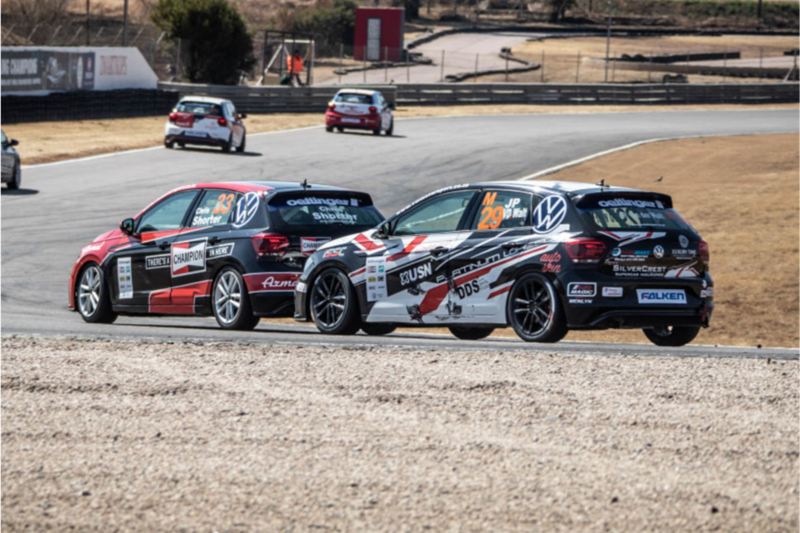 The starting order for the second race of a round in the Oettinger Polo Cup is determined by a numbers draw. Luck was on Busi’s side as he drew the number that would see him start the race from pole position. As with Oates in race one, it was Busi’s turn to make the most of his superior starting position. The race was yellow-flagged for two laps as marshals recovered the stricken Polo of Chris Shorter. When the green flags were waved, Busi put in a series of very fast laps to ever so slightly stretch his lead at the front of the pack.

He was chased throughout the race by Darren Oates and brother Justin who fought his way up to third after starting in sixth. Busi could not be caught and crossed the line to take his second victory of the season ahead of both Oates brothers and Clinton Bezuidenhout who just missed out on a podium finish in fourth. Matthew Shorter was fifth with Stiaan Kriel the sixth Polo across the line. Busi’s victory and points haul on the day means he extends his overall lead on the championship points table.

The Oettinger Polo Cup was however not the only series to provide a spectacle. The day also saw the debut of the all-new SupaCup series in which a number of very fast drivers took each other on in identical new Polos built by Volkswagen Motorsport. The drivers in the new series include the likes of former Polo Cup champions Jeffrey Kruger and Bradley Liebenberg, as well as Volkswagen Motorsport’s Jonathan Mogotsi. The battles in both races were fierce to say the least. Kruger and Liebenberg shared the two victories with Mogotsi finishing hot on their heels in third.

The next planned race will hopefully take place on 25 September at the Red Star Raceway near Delmas. 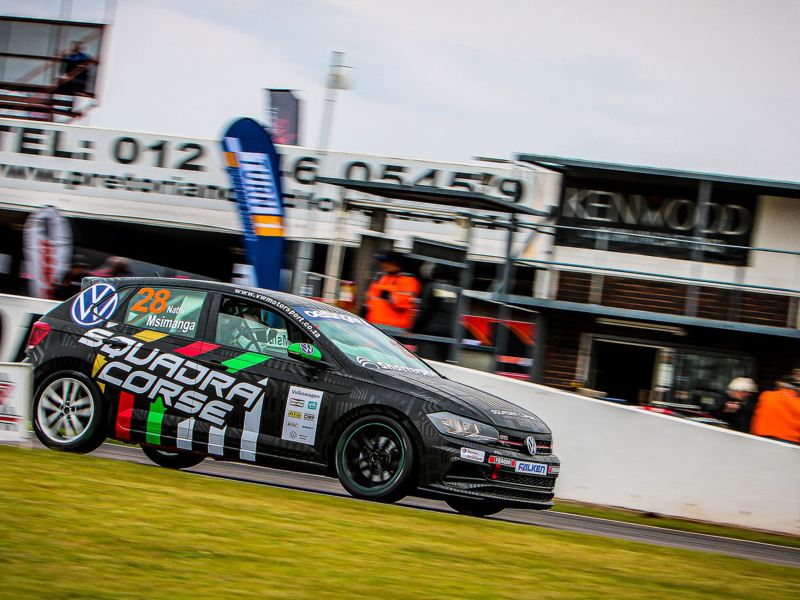 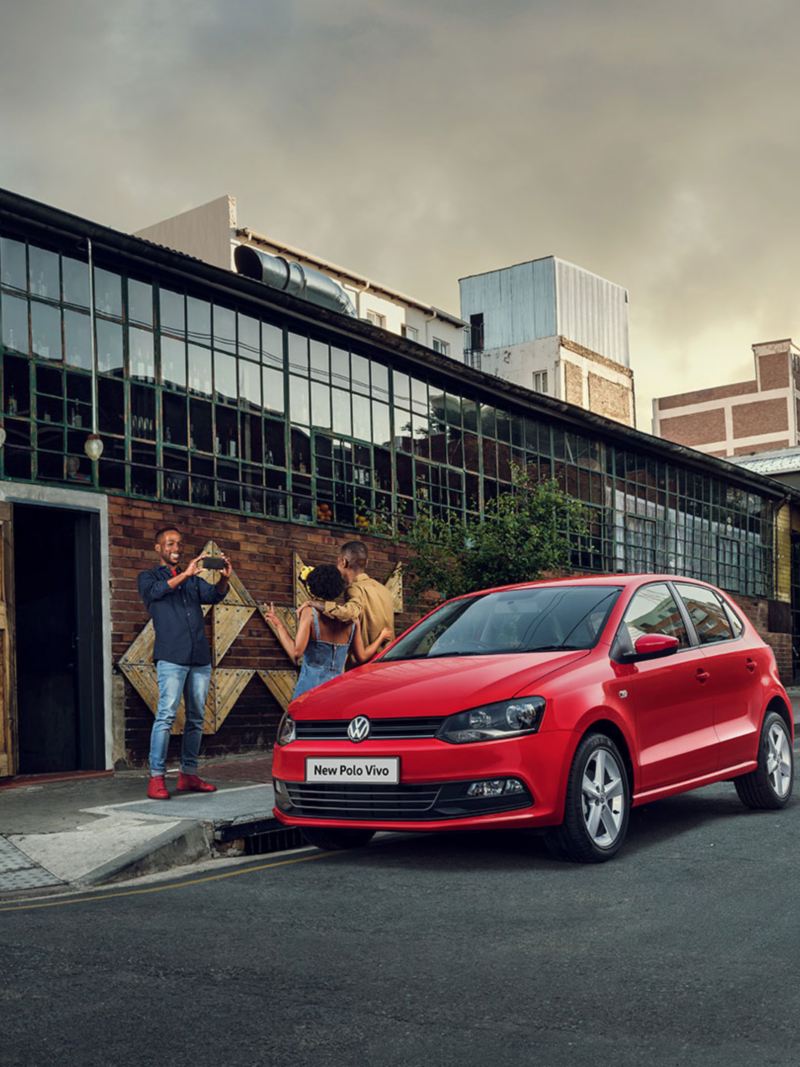